40g porridge oats made with water

Juice of one lemon

Take a Cameo apple: finely chop and place in a saucepan with the juice of one lemon. Cook until soft this will form your breakfast base. You can then choose to serve in a variety of ways.

We dont peel our apples as the skin has such a lot of the goodies, it turns the apple puree a very pleasing pink colour too! 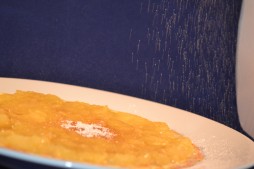